I bought the Musgrave Tennessee Red pencils after hearing that Musgrave revamped their brand and added new pencils. I’ve mostly stuck to Blackwings and Japanese brands, so I haven’t tried many American pencils. There are only a few American pencil companies left, so it’s important to support them! Also, a dozen Tennessee Reds are only $9, compared to $25-28 for a dozen Blackwings. They are made of Tennessee red cedar instead of California cedar. Apparently, that’s what Musgrave pencils were made out of until the ’60s. Luckily, Musgrave found a new source of the wood!

However, there are quality control issues with the pencils, which I want to mention up front. In their blog post, Musgrave says that because they are new to working with this wood, some pencils will have off-centered lead or will be slightly warped. I’ll explain the issues I found with my pack later.

My pencils came in a beautiful red slipcover, with the words Tennessee Red in vintage-looking letters. They are stunning! The pencils are natural but have a clear gloss over them. Tennessee Red reminds me of a hardwood floor, with a similar smell. They aren’t as fragrant as Blackwings but still smell delicious! There are interesting whorls and variations that make each pencil unique. One of my pencils looks like a black and white cookie, with one half a lighter color than the other! I love the vintage red imprint but I wish that it showed up more against the dark wood.

They also have a very sharp hex, which means the edges are hard. It digs into my fingers. I wish that the edges were softer like Blackwings. I liked the combination of red with the golden ferrule and white eraser. Sadly, the eraser isn’t very usable, but most aren’t! 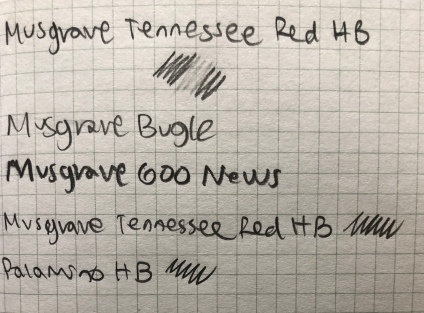 The hex is #2 but feels softer. It’s similar to Palamino HB. It’s smooth and dark on paper with some tooth. I tested it on Write Notepads and it was great. I didn’t feel any grit or scratchiness like I do with some pencils. It also has kept its point despite writing pages of notes. It’s a contender for my favorite lead, with the Blackwing 602 still holding first place.

However, I had quality control problems with my pack of pencils. I’d say 3-4 of mine are off-center. Even worse, one of them was completely messed up. It looked like the two slats were misaligned. It looks impossible to write with. They are also hard to sharpen, especially in hand-held sharpeners. The wood is thick and dense. I used my brass Möbius and Ruppert sharpener which worked but it took some effort. Finally, the hex is much too sharp for me.

I also was given two free pencils in a sleeve, a Musgrave 600 News and Musgrave Bugle. I loved the dark, smooth lead of the News, but I broke the tip instantly. It seems perfect for sketching! I didn’t like the Bugle, it was too light and scratchy. Both pencils felt lightweight without a ferrule and eraser.

I love the idea of the Tennessee Red pencils but I think better quality control needs to go into the next batch. At least Musgrave was honest and wrote a blog post explaining the issues. They also aren’t very expensive compared to Blackwings. If you’re okay with potentially getting off-center cores and love the beautiful red cedar, then I would purchase. I bought a pack for my mom and she loves them! Otherwise, I’d recommend waiting for the next generation of these pencils.

I bought this notebook with my own funds. I was not paid for this review.

I did some late summer cleaning of my room last week, which involved clearing off my entire desk of all fountain pens, inks and notebooks. :O I took the chance to count up all my inks I’ve bought over the last three years of my obsession/hobby.

The final count: 64 bottles! I’ve made a list of all the brands I have, sorted by amount.

Robert Oster and Monteverde top the list in terms of amount of bottles. Not only are they wet, shading inks but they also are much cheaper than Japanese inks. I buy them because they’re inexpensive and come in many colors. J.  Herbin is also nice and only felt watery in Perle Noire, which I promptly gave away. Iroshizuko and Sailor are my absolute favorite brands but because of cost I don’t have as many. They exhibit the best shading and sheen!

My favorite inks overall are Iroshizuko Ku Jaku, Iroshizuko Yamabudo, Sailor Sky High, Sailor Apricot, Monteverde Ocean Noir, Lamy Dark Lilac, Kobe #48, Robert Oster Cherry Blossom, Bungubox June Bride, J. Herbin Rouge Grenat, all my Kingdom Note inks, and Taccia Uguisu. I love teal, blue and red inks most of all. I’m most proud of getting a bottle of Lamy Dark Lilac and several boxes of cartridges! It was a lucky find at the D.C. Pen Show in 2016. I missed all the hype about it before because I was just getting into the hobby then.

Here are some individual pictures of my collection. I put them in a slide show so you can see them.

Most of the inks I disliked I got rid of, but there are still some in my collection I’m meh about. I enjoyed Robert Oster Frankley Blue until dried ink crystals from the bottle cap exploded all over my desk. Nemosine Coalsack Nebula is a beautiful shimmer ink but clogs so much. J. Herbin Emerald of Chivor was the most hyped ink of 2016 but didn’t live up to my expectations.

My emptiest bottle is Ku Jaku, because it’s a beautiful teal but mostly because its cap is cracked and there was a leak at some point. I only have 1/3 left. Yamabudo is close, with 2/3 left. Robert Oster Frankley Blue and Sailor Okuyama also have a good amount used up, also because of leaks. The rest aren’t even close! The problem with having so many inks is that I use different colors each time I write. It never gets boring but I also go through inks slowly. 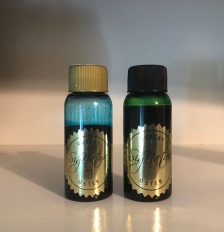 I hope you enjoyed looking at my ink collection!

Lately, I’ve been searching for more unusual ink colors. My collection is mostly blue, purple and red which gets boring. One of my new favorites is J. Herbin Corail des Tropiques. It comes closer than any other ink in capturing the summery coral color. The ink itself comes in a small 30ml bottle. It’s possible to suck up ink without using a syringe, but I’d recommend one anyways because the bottle is so small. 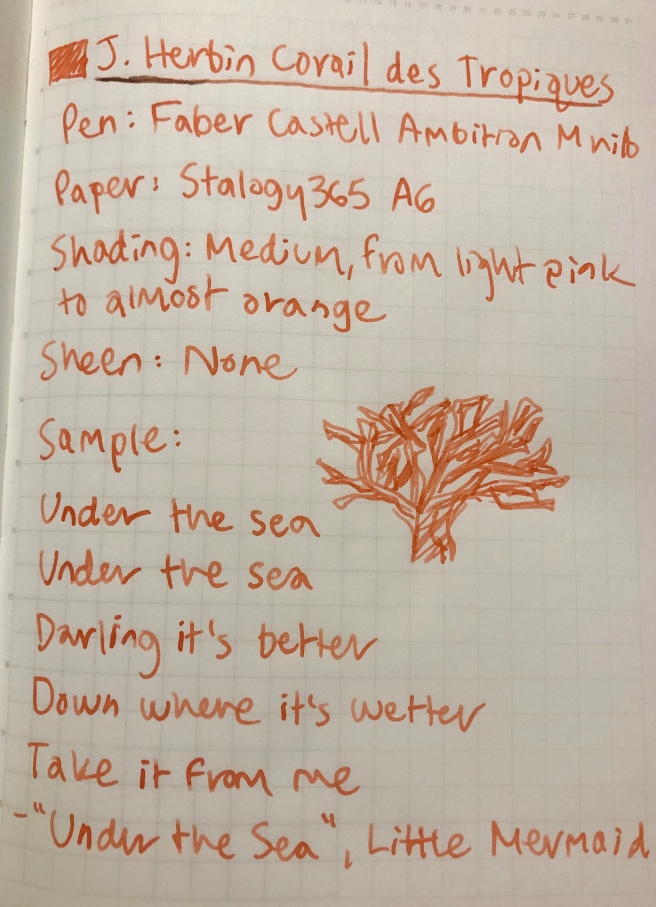 The color is a lovely pink with orange tones. My photo shows it as more orange than it is! The ink is smooth in my Faber-Castell Ambition with a medium nib. It isn’t watery like other J. Herbin inks sometimes are. In the M nib, the color is dark enough to be legible. It is harder to read in long passages. I wrote a ten page story using this ink and I had some trouble reading my text at first. However, my eyes got used to the light tone. I would use a larger nib with this ink.

Monteverde Coral, a similarly named ink, is much darker and oranger. I really didn’t like it so I don’t have any picture to show.

So Corail is the best option for a coral-colored ink! It may be too light for some people’s eyes but I enjoy it overall as a summery ink.

My haul from the DC Pen Show!
The Musgrave Tennessee Red pencils are gorgeous! Review about them is now up on my blog!
I tried out the Goulet Notebook with 68gsm Tomoe River paper!! It’s really nice and I recommend it if you want a slim notebook for an insert or standalone use.
I had a awesome time at the Baltimore Pen Show! But the best part was showing my friend what a fountain pen convention is like!! I had a great time talking to you too Brad @penaddict
Working my way through my “stealthy” stash. I like using my notebooks in a thematic way, at least for pocket notebooks where I fill them up quickly. After this wintery batch comes my Writepads Sakura, FN A&E and other floral notebooks! ****
Nib shot! Sailor 1911 M nib with Papier Plume Heart of Gold ink. I love seeing the ink flow through the grooves on nibs. *** #stationeryaddict #stationerylover #fpgeeks #fountainpenaddict #nib #fountainpen #fountainpens #nibshot #pen #penaddict
Loading Comments...