So I’m back from the Baltimore Pen Show! It’s my third year and the show is only getting better each time. This year I brought my friend who I’ve converted to fountain pen usage. 😀 It was her first convention ever so I hope I did a good job introducing her to this wonderful niche hobby.

I didn’t take too many photos but some of my favorite stops were at Vanness Pens, Schon Design, Nock Co. The pen maker tables were such eye candy! My biggest purchase was a Schon Design Pocket Six. There wasn’t any more of the Pink and Purple colorway, but I bought a beautiful blue swirled one that was only sold at the Baltimore convention!

I also got a photo with Brad from the Pen Addict! He was one of the first pen blogs I read and inspired me to start my own website. So thank you so much Brad! 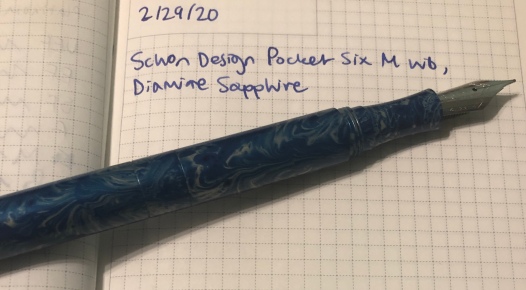 Overall, I focused on acquiring new inks and pens. The Pocket Six pen is really cool because it’s tiny but capable! If you screw the cap onto the end, it turns into a much longer pen. It only fits cartridges but that’s a good excuse to buy more. I also bought a TWSBI Eco-T in the mint color! It has a juicy broad nib that is perfect for Vinta Maskara. The Kaweco Perkeo was on the wishlist for a long time and I got it with the medium nib. 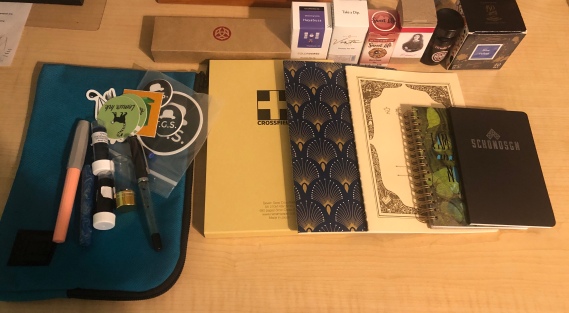 As for colors, I bought Vinta Maskara, Organic Studios Emily Dickinson, Monteverde Cherry Danish, Diamine Velvet Blue, Colorverse Hayabusa Glistening and Franklin-Cristoph Urushi Red. Vinta Maskara is much more legible than Vinta Sirena. Somehow it looks purple with hints of blue and pink! I plan to make a review of it soon. Emily Dickinson is another favorite; it’s a bright magenta.

I bought a Nanami Crossfield with the new smaller crosses. I’ll try and make a comparison with the older version I have. I also bought a Clairefontaine with an Art Deco design, Kyupodo lined notebook, a laser-cut Drama Mama notebook, and a Schon Design x Write Notepads book. I also got a Nock Co.  A5 Lanier Pouch which is perfect for transporting one notebook with a few pens and even a pocket notebook!

I had a great time at the show but it was even more fun showing my friend the fountain pen world and seeing my favorite pen people!